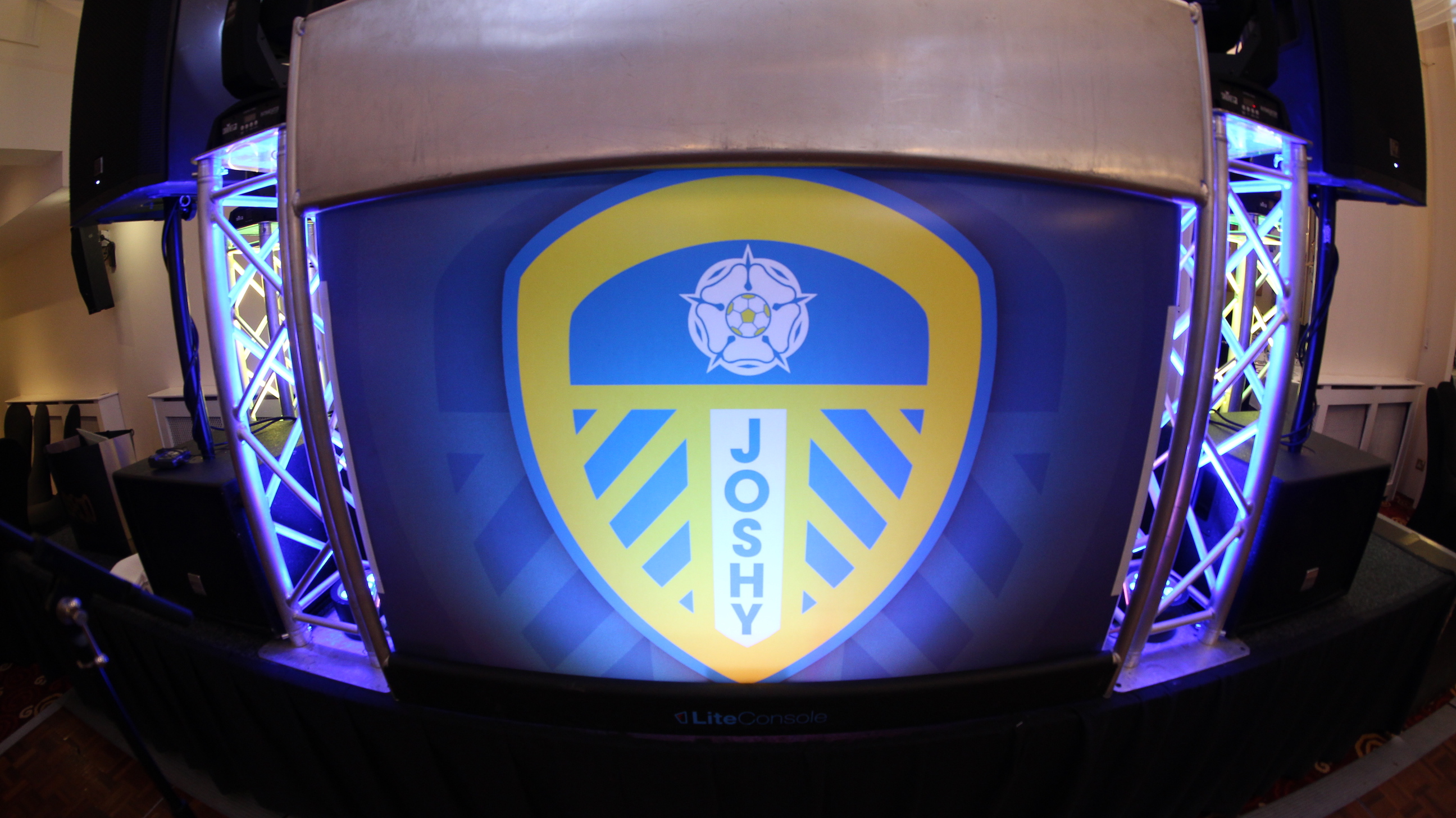 On Saturday 25th February we were booked to perform at Joshy’s Bar Mitzvah party which took place at the Mercure Hotel on Otley Road, Bramhope.

Joshy’s parents had opted for our second Bar Mitzvah DJ Package which includes our Premium DJ Setup, freestyle dancers, confetti cannons, radio microphones and of course the custom branded DJ stand which you can see above.

Joshy’s dad Mark worked at Leeds United and the whole family were massive fans so no surprises that was the theme they opted for, so we coloured the DJ stand and the lighting in Blue and Yellow accordingly.

The whole evening got underway with some background music whilst the guests enjoyed drinks, once we were given the go ahead we invited the guests to take their seats and prepared to welcome the family into the room.

First in it was Joshy’s parents and brother who came in to the very famous Glory Glory Leeds United song, lots of singing and a huge round of applause. Next up it was time introduce the man of the moment… Joshy who made a dramatic entrance to Marching on Together, again a huge Leeds United track. He took his position on the centre of the dance floor and we fired our confetti cannons whilst the photographer got some excellent shots.

Straight from the Bar Mitzvah boys grand entrance we invited all the guests onto the dance floor for the Israeli dancing, and they didn’t disappoint! Despite being informed by Joshy’s mum that he had a fear of heights within a matter of minutes he was sat on a chair and hoisted up in the air alongside his father… and then out came the table cloth! 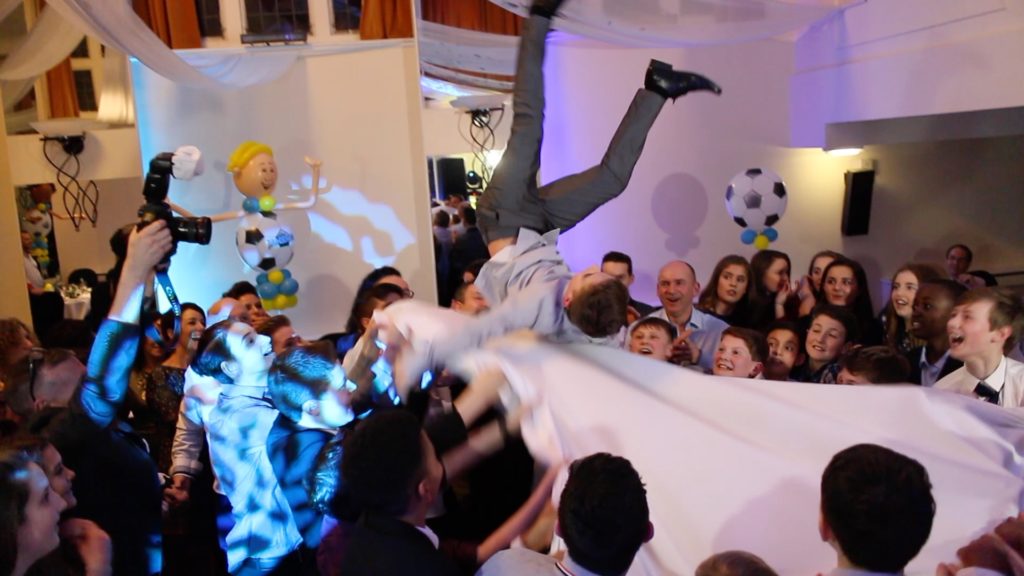 It was great to see guests of all ages up on the dance floor and it was definitely some of the most intense Israeli dancing we have seen for a while!

We managed about 15 minutes of Israeli dancing madness before everyone was worn out and our DJ asked guests to take their sets so that dinner could be served.

After the main course it was time for the first section of speeches all hosted by the Chairman, Joshy’s uncle, Nicky. First up it was Joshy’s mum and dad who gave an excellent speech and gave Joshy the first of his surprises… a signed Leeds United shirt.

Next it was the turn of his older brother Oliver who again delivered a fantastic speech before Joshy got his second surprise. His dad had managed to get recorded video message from loads of Leeds United players which we played on the big screen and a second PA system.

After Olivers speech our DJ announced that desserts would be served and whilst the guests were enjoying the food it was time for the next set of speeches courtesy of Joshy’s friends.

He had to lots of friends doing speeches, the first group had arranged a football quiz for him so we sat him on the dance floor on a stool with a big white spotlight shining on him while his friends tested his knowledge of footy in exchange for FIFA points. He didn’t disappoint and got 9/10 correct!

The second group of friends came out to Glory Glory Man UTD, a controversial choice given the theme, dressed in Blue & Yellow tutus and leg warmers before bursting out into song with their very own version of One Direction – History.

Joshy’s was the final speech and he kept it short but sweet, possibly a bit too sweet as his mum started crying!

Now that all the speeches were out of the way it was time to start the party. We got everyone up on the dance floor for a huge group photo and then got the dancing underway.

Our acrobatic dancers appeared through the doors doing jumps and flips on the dance floor and encouraging guests to get involved. 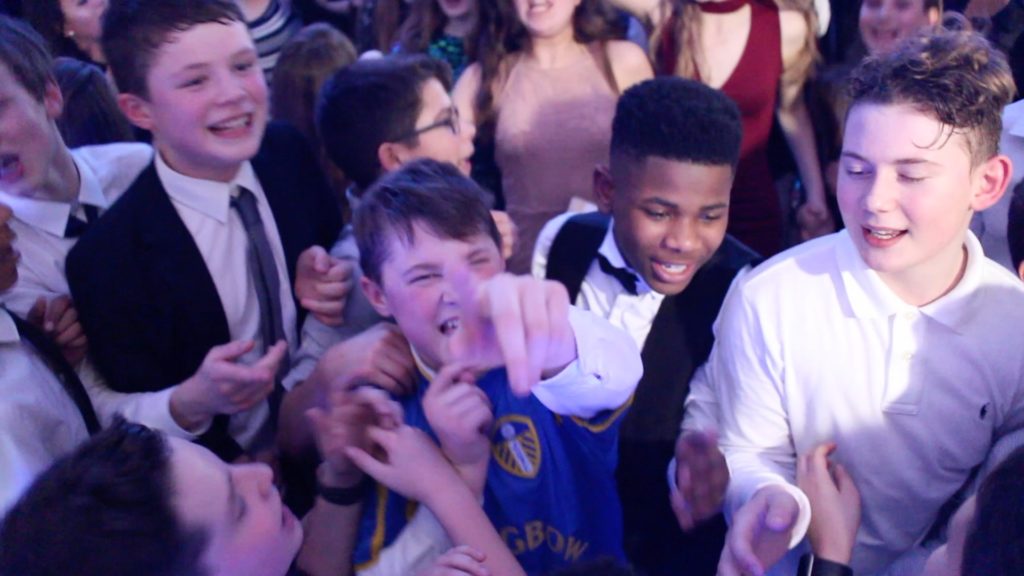 It was a fantastic evening of dancing with our DJs playing a huge mixture of music from current chart right back to party classics such as Oops Upside Your Head and the YMCA. 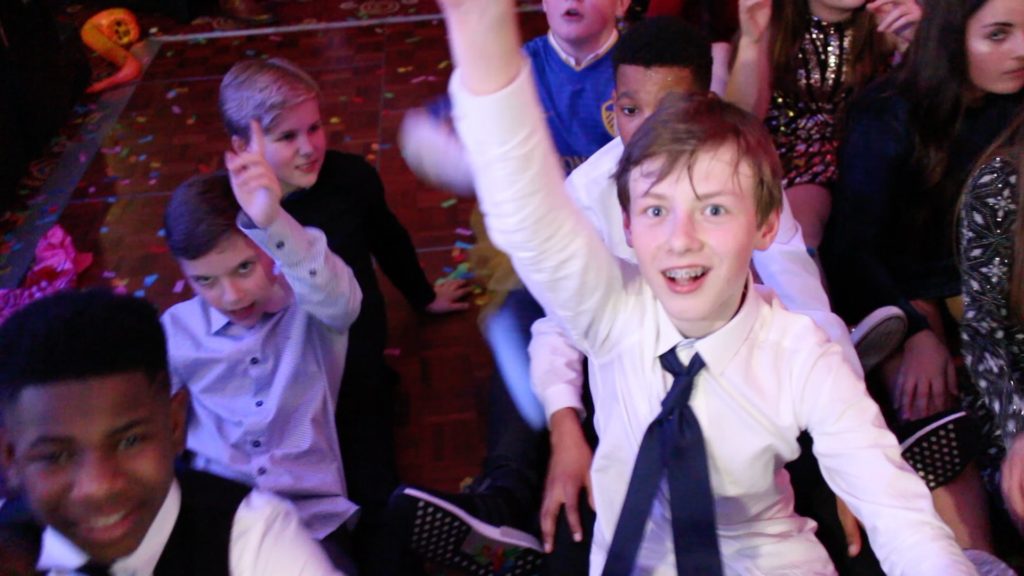 There was lots of great moments from the guests including Joshy’s Grandad singing New York, New York, his uncle showcasing his dance moves to Beyonce’s Single Ladies and we even got Joshy’s parents up for a big sing-a-long to the Grease Megamix, although somehow his mum managed to forget the words to her part! 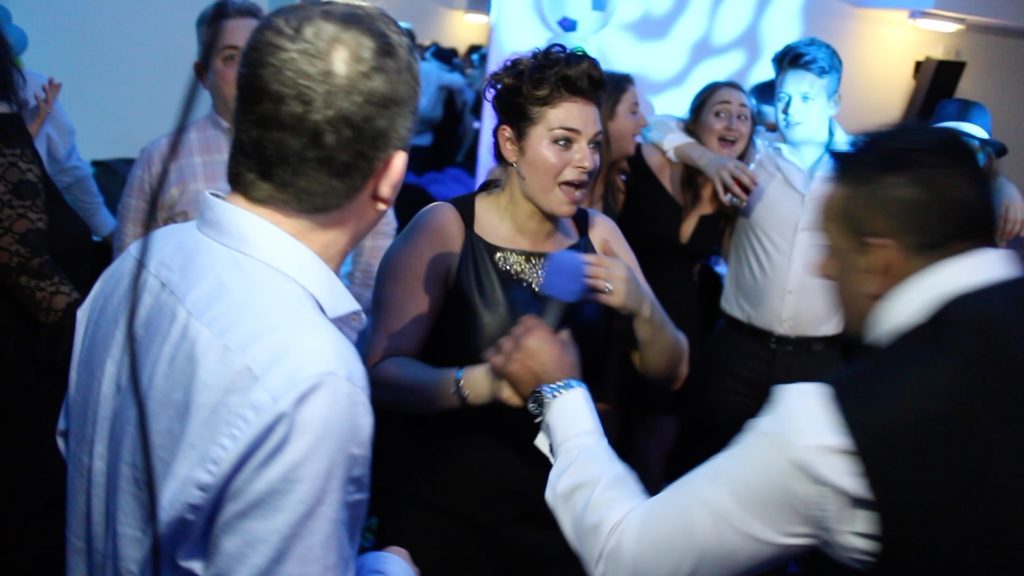